There (deep breath), we said it. And we promise that the sooner you deal with it, the better it will be for your ROI on ad revenue.

The first thing you may want to do is identify the extent of the problem. We want to save you time: As of 2015, 198 million people were blocking ads globally, so the percentage of AdBlock visitors to your site is likely to be significant. Check out these stats from a survey of 1,000 U.S. internet users:

Overall, 40% of all web surfers use an ad blocker, and they are primarily motivated to do so in order to avoid “irrelevant” or “annoying” ads.

How do ad blockers work?

There are a variety of browser extensions and VPN services that allow internet users to block ads. In a way, they’ve become the Internet’s litmus test of successful (unobtrusive) ads.

Ad blockers generally rely on filter rules that come from EasyList, a large collection of known ads on English-language websites, to know what internet users want them to block, hide, and allow to appear (when sites are whitelisted). Every time a user goes to a website, the ad blocker compares the HTTP request to these filter lists. If a URL matches one of the filters (often, the default would be all websites to start), the ad blocker will block the request and not download the resource. The popular extension AdBlock, for example, injects a stylesheet onto every webpage that contains selectors that display ad images encoded with data:image/png, thus hiding them.

Why should I take action on ad blockers?

Keep in mind that while the majority of ad block-users do so on their laptops, ad blockers are mainly harming your desktop impressions. This is because big desktop formats like branding, megaboards, big sticky banners, and more are considered premium inventory, have high eCPMs, and/or are offered via private auctions, preferred deals or programmatic guaranteed, which is again increasing in value.

If you are not a mobile-only website or your target audience is not over the age of retirement, in our opinion, you don't need to waste time trying to quantify the exact number of site visitors using an ad blocker. Considering that in 2015 alone, according to Adobe, $21.8 billion in global ad revenue was blocked (a number that stands at nearly $35 billion going into 2020), this is an issue that’s worth addressing no matter what.

Internet users are interested in content; no one browses the web specifically to see ads. Your readers are likely largely unaware that ads are a major revenue source for the exact content they like.

“The damage is more than financial. It’s existential. The rise of ad blocking comes just as the media industry had settled on a revenue model to move forward after years of disruption and pain. The new model looked a lot like the old one: circulation revenue plus ad revenue equals sustainability. With so few people willing to pay for news, advertising was supposed to bring up the rear. But publishers seem to have totally overlooked the fact that, while print ads were relatively innocuous and unavoidable, digital ads are different. They aren’t static. They blink. They follow. They irritate. And readers can do what they never could in print: erase them.”

As the number of ad-block users is increasing, there is less high-quality desktop inventory left. Once you reduce your share of visitors using ad block, your ad revenue will grow without you needing additional traffic.

First, keep in mind that internet users see ad blockers as a user-friendly consumer protection, which is why the ad-block industry has thrived in recent years. Your readers may not realize that blocking your ads means they are contributing to their favorite publishers’ struggle to keep afloat.

Ad-blocking software, by default, allows some ads through its firewall that internet users at large have agreed are unobtrusive to their browsing experience. The ads it deems “acceptable” meet a series of strict criteria that include ads being text-only, no animations, no pop-ups, and no placement in the flow of text—-automatically eliminating most of the ads on the market today. AdBlock Plus (distinct from AdBlock), for example, offers sites the chance to apply to be whitelisted, which entails working with them to ensure their ads comply with the criteria.

While you may not want to spend the money to get approved by ad blockers and thus heavily restrict the ads you can show, there is certainly something to the concept of whitelisting:

Here are a few ways you can motivate your users to whitelist your site or even stop using ad blockers in the first place.

How can I deal with ad blockers?

First, don’t be a part of the problem

If your brand is strong enough to influence your audience, you can try to persuade readers yourself not to use ad blockers.

Start by getting rid of annoying ads (think about the ones that blink, follow, and irritate, as Michael Rosenwald mentioned above). No one likes them, probably not even you when you browse the web! If you incorporate these ads, then your readers are using ad blockers to improve their experience on your site—-which is bad news for you, even though you use that revenue to finance your content.

If you’ve already done so and your believe your audience is tied to your brand, try to communicate to them how important ad revenue is for maintaining the content they love on your site. Let’s look to U.S. news-media company CNN for a great example: 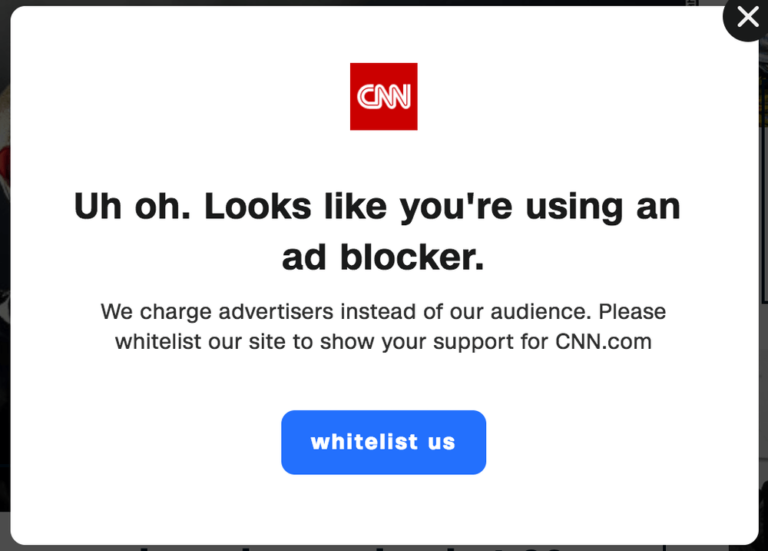 This is a great way of acknowledging the elephant in the room and showing readers you understand their pain points (an Adobe poll revealed that nearly 80% of internet users are not willing to pay even a small fee to make ads disappear, and only 11% subscribe to publishers online) at the same time as being transparent about yours (according to a Digiday survey, programmatic ads represent the largest driver of ad revenue for 55% of publishers).

Have you heard of the Better Ads Standards? This is an initiative by The Coalition for Better Ads that developed standards (which, as of January 2019, they support for worldwide adoption) for desktop and mobile web based on comprehensive research that asked consumers to rank ad experiences according to their user experience. Those that ranked lowest were directly connected with the likelihood these consumers would adopt ad blockers, and these ads are thus considered to fall below a minimum threshold of consumer acceptability.

For example, the Coalition found that some of the ads that were among the most disruptive and least preferred by consumers on desktop were auto-playing videos with sound (because “[they] catch the reader off guard and often compel them to quickly close the window or tab in order to stop the sound”) and large sticky ads that take up more than 30% of the page’s real estate, obscuring the content site visitors came to see. 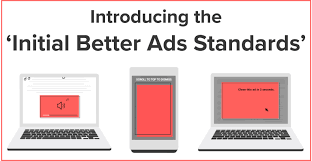 There is no other way to say it than honestly: If your site is not compliant with these standards, like allowing your audience to easily close ads, you are part of the problem and can be harmed by a variety of penalizations (including your current readers using ad blockers) that can affect your ad revenue.

The most severe penalty of non-compliance with Better Ads Standards is that, as of July 2019, Google Chrome (consumers’ dominant web browser of choice) may not display your ads at all:

“For compliant publishers, it will have no impact, but the big change here is that where Google before was filtering ads in contravention of the standards, they will now remove ALL ads from sites that 'repeatedly' violate the standards. There's no official word on how 'repeatedly' you'd need to break them, but it probably won't be that many; Google is an integral part of the Coalition for Better Ads and is very keen to improve user experience in order to protect its own revenue.”

Next, turn to the tools helping publishers

If your brand connection with your audience is not strong enough to motivate them to whitelist you, this method will be ineffective. But don’t worry—-you’ve got other options.

There are many tools, like widgets, plugins, and modal windows, designed to help publishers with this problem.

It first detects ad blockers with a script and then allows you to display messages for ad-block users that can capture otherwise lost revenue by giving these visitors choices for how they’d like to fund your content. Options for EU user consent are available.

If you don’t have a Wordpress site, there are other options.

What’s the silver lining? (There always is one!)

Remember that every problem is an opportunity. In this case, you may look into converting ad-block users into paying subscribers.

"Paying visitors if what we all dream about. The ad revenue you get per visitor is a fraction of what could be earned with subscription services. With services like funding choices, you are targeting visitors that may not even be beneficial for your business. Restricting access to your content and offering ways to access it is the optimal strategy.”

The New York Times is the world’s 18th-largest publication currently in circulation and currently has over 4 million paid, digital-only subscribers. Its long-term effort to increase paid subscribers by restricting per-month article access has paid off in 2019, resulting in higher revenue from subscriptions that offset lower ad revenue and not changing their count of unique monthly visitors, for a total revenue of $428.5 million, or 2.7% growth from the same time in 2018. Here are a few examples of how they did it: 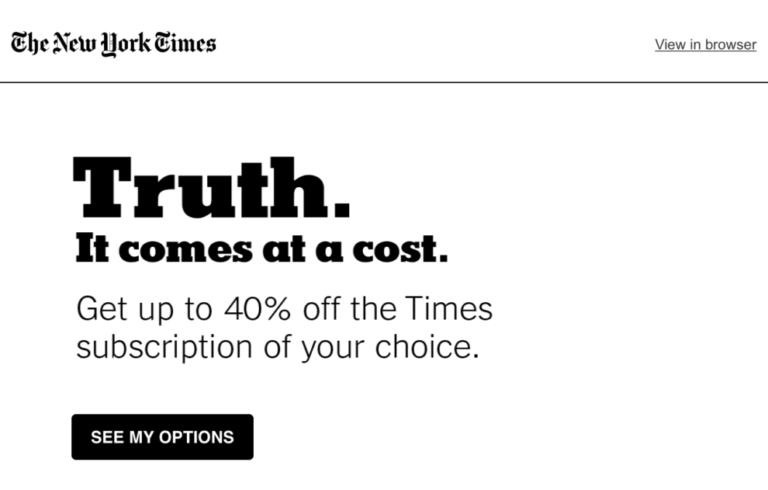 Another popular publication, The New Yorker, is another publisher whose revenue from subscribers exceeds that of advertisements. The New Yorker offers a free gift as an incentive for an attractive subscription: 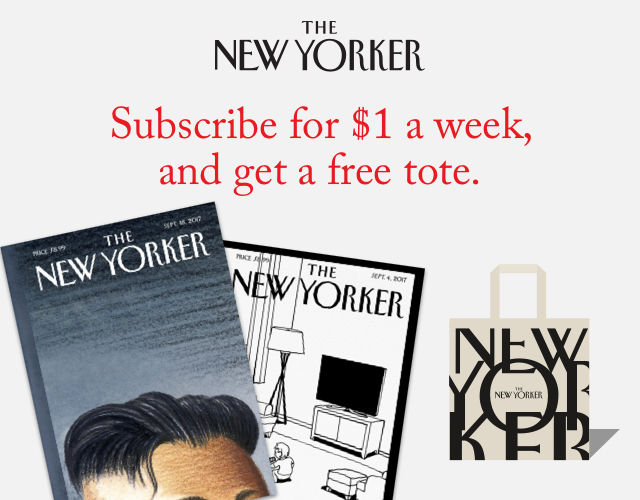 What’s next in my battle with ad blockers?

Paywalls can be a very effective tactic in avoiding ad blockers and raising your revenue. Look first to the most loyal segment of your audience:

FatChilli has a solution for handling ad blockers.

This is available as an on-request feature for our customers.

This website uses cookies to improve your experience while you navigate through the website. Out of these, the cookies that are categorized as necessary are stored on your browser as they are essential for the working of basic functionalities of the website. We also use third-party cookies that help us analyze and understand how you use this website. These cookies will be stored in your browser only with your consent. You also have the option to opt-out of these cookies. But opting out of some of these cookies may affect your browsing experience.
Necessary Always Enabled

Any cookies that may not be particularly necessary for the website to function and is used specifically to collect user personal data via analytics, ads, other embedded contents are termed as non-necessary cookies. It is mandatory to procure user consent prior to running these cookies on your website.